Nilanjana Purkayasstha and Herumb Khot’s “Dhadkan Zindaggi Kii” recently saw Dr. Deepika Sinha asking Dr. Vikrant Saxena to go to a rehab. She tells him that once he is sober, he can join the hospital back and she will monitor him personally.

Later, Deepika finds Vikrant at the hospital and is shocked to see him there. She tells him that he shouldn’t have come there and has left no option for her but to report him. After a while, she finds Vikrant talking to a patient’s baby and asks him to go back to Delhi to his wife and plan their family.

Vikrant’s sister is also trying to get Deepika out of his head and threatens him that if he doesn’t go back to Delhi, she will tell his wife about them. While going back home, Vikrant drives rashly and even when his sister tries to stop him, he doesn’t listen.

Meanwhile, Dr. Sia Advani has been doubting Dr. Abhay Sathe’s behaviour and believes that he is in a relationship with someone else. Though Abhay disagreed with it initially, he later tells her that he is not in a relationship, but has feelings for someone.

In the upcoming episode, we will see that Vikrant’s sister tells Deepika that he intentionally bumped his car into a tree. Once Vikrant is up, Deepika asks him why is he putting everyone’s life in danger. She tells him that he will be in trouble if someone checks his blood samples. Just then they see Abhay at the door. Did Abhay hear their conversation? To know what happens next keep watching “Dhadkan Zindaggi Kii”. 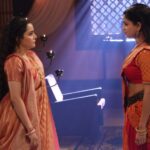