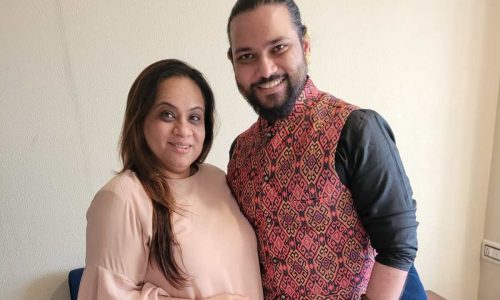 The devotional track Shiv ki Dhun is one of producer Chitra Vakil Sharma’s best creations, and she is loving the response the song is generating. Released on her YouTube channel Jupiter Hub, the song has been sung by Eklavya Sakpal and jointly produced by Chandni Soni , Rohini Vakil Kapoor and Chitra Vakil Sharma.

“The response is truly amazing. Shiv Ki Dhun is a devotional song and we are getting such a beautiful response on our very first devotional song right from the first day of its upload and it’s crossed 75K organically. This is truly a sign of being blessed by the universe. Shiv ki Dhun is being played in a lot of Shiva temples these days. Especially in the premises of Mahakaleshwar Jyotirlinga of Ujjain , Trimbakeshwar Jyotirlinga in Nasik , what more can you ask from the universe? You create a song in the devotion of your lord and the song is being played on the loop at his Dham, this is truly a beautiful feeling,” she says. Infact the song has reached all 12 jyotirlingas and that’s what we all wanted.

Talking about how the track was created, Chitra says, “It was just a blink of a moment. Me and Eklavya were having our normal spiritual talk and randomly we decided to do a song dedicated to our favourite, Mahadev. The moment where we decided to make this song, that same moment we got into creating it. There wasn’t any planning or much thinking involved in this. It came all naturally as if it came directly from the universe itself.”

Devotional songs have an audience now more than ever, says Chitra, adding, “In today’s time of social networking, people are losing their connection with the people and expressing their emotions only via emoticons. So many emotions are being holed up in every single breath and it becomes suffocating at times.

Listening to good devotional songs helps in relaxing your mind by releasing all those toxic emotions. It actually takes your mind to a state of blissfulness. People might not be able to express this, but I’m sure everyone does experience this.”Her association with music goes way back. “Right from my childhood, I used to love seeing my mom singing those beautiful songs from the era of the 70’s.

So, it won’t be wrong to say that my mom introduced me to music. I still listen to those songs from the golden era. In fact, I not just listen to them but I live in them, as they carry so many beautiful memories about my mom and my whole childhood,” she says.

Talking about future plans for Jupiter Hub, Chitra says, “Right now we are working on original compositions of Eklavya Sakpal. Besides music, we are also thinking about films and a mythological TV show. I have Eklavya Sakpal beside me who himself is such a good mythologist.”