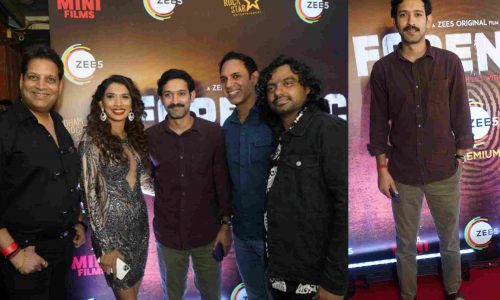 National, 23rd July 2022: Almost a month post its release on 24th June, Forensic continues to make headlines and grab eyeballs. The ZEE5 Original film was a direct-to-OTT release starring critically acclaimed actors Vikrant Massey and Radhika Apte. And, for the first time in Bollywood, a forensic expert was leading a film instead of being a sidekick. Directed by Vishal Furia, ‘Forensic’ is the Hindi remake of the Malayalam film of the same name and also stars Prachi Desai, Vindu Dara Singh, Rohit Roy and Anant Mahadevan in pivotal roles.

With 9Mn+ views so far on ZEE5, Forensic is performing really well on the OTT platform as well. Owing to the success of the film, the makers got together with the cast and the crew to celebrate the performance of the film. Seen at the party were Manish Kalra (Chief Business Officer, ZEE5 India), Producers Deepak Mukut and Mansi Bagla, Director Vishal Furia, Actors Vikrant Massey, Vindu Dara Singh, Anant Mahadevan and others.

Vikrant Massey said, “I was extremely nervous before the release of Forensic because I am portraying an unconventional and a quirky character however, I am glad that the viewers have liked my character and the film and have supported it extensively. The performance of the film on ZEE5 is proof of the pudding of our hard-work and this calls for a celebration”.

Manish Kalra, Chief Business Officer, ZEE5 India said, “We are proud to be delivering on our promise of presenting engaging and entertaining stories to our users and “Forensic” is another success story from ZEE5. The movie not only has performed well on our platform but also has resonated with the viewers across and hence has made it to the list of ‘Most Watched’ and ‘Most Liked’ Hindi Films by various industry trackers. We are happy to have kept the viewers as our top priority and are focused on making content which appeals to them with many more such successful stories to come”.

Deepak Mukut, Producer, Soham Rockstar Entertainment Pvt. Ltd. said, “We have always backed good content and interesting stories that have resonated with the audience and the success of Forensic is a testament of the fact that content is the king. Gripping crime plot, intense performances and edge of the seat narrative have made ‘Forensic’ a good watch, to the extent that it has ranked amongst Top 5 most liked Hindi direct-to-OTT films as per Ormax Media report. I congratulate everyone associated with the movie for its huge success.”

Mansi and Varun Bagla, Producers, Mini Films, said, “We have always been confident of Forensic since the beginning. Making this film has been a career high. Firsts are always special and we are happy that we have pulled out our first film to be a blockbuster. Sheer dedication, hardwork and good teamwork has made this happen. Every challenge we faced made us only want to achieve more. Forensic is a cult film which will always be loved by generations to come. We are sure you will now see many films coming that give importance to Forensic investigations. Movie making is a tough business as you are creating a product out of a strong vision and dealing with people and not machines to make it a success. It’s a wonderful feeling to make a film which is loved by the audience. It means it will always stay forever.”