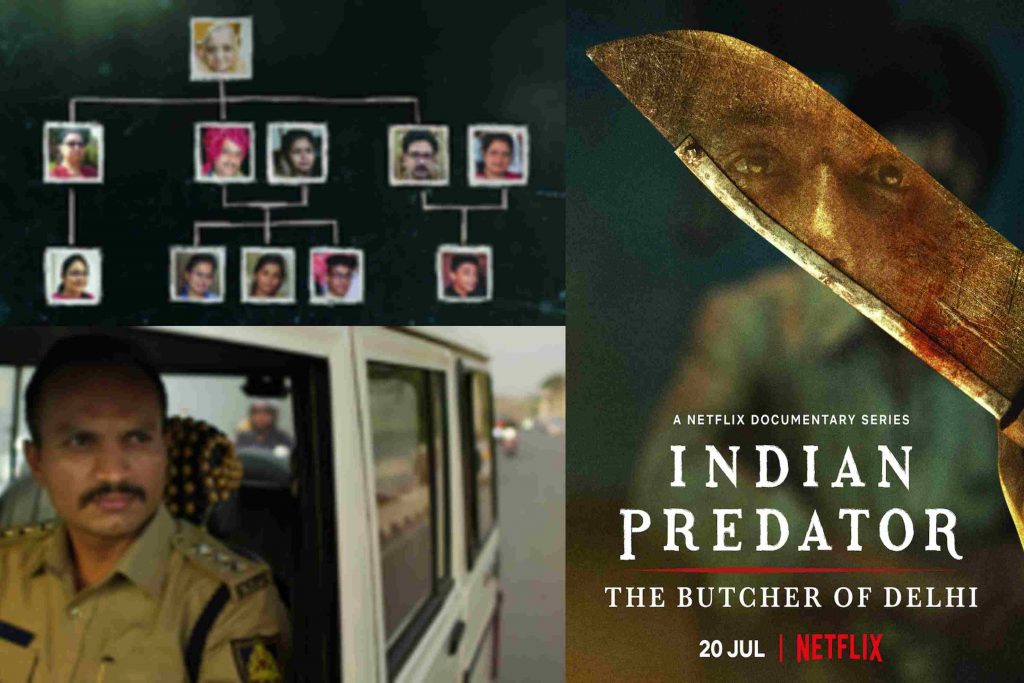 You know what’s hard to look at but harder to look away? True crime documentaries that make us face the sinister side of reality. Over the past few years, the true crime genre has exploded. From podcasts and documentaries analyzing past cases in forensic detail, to books about ominous murders, and television dramas that bring to life stories of real life crime the genre has gained audiences globally. If you’re also one of those, here’s a roundup of some of the most gripping true-crime docu-series on Netflix that you MUST watch –

Indian Predator: The Butcher of Delhi – Netflix India’s upcoming spin-chilling documentary – ‘Indian Predator’ is based on one ruthless serial killer and his multiple blood-curdling crimes. The series is a classic whodunit chase by the Delhi Police’s investigation team as they race against time to nab the ‘Butcher of Delhi’. The trailer promises a dark and dreary watch – one that will definitely intrigue and excite the ‘true-crime’ enthusiast in you.

House of Secrets : The Burari Deaths – This Netflix’s Documentary series – House of Secrets: The Burari Deaths sent a chill down the spine of the entire nation. A hair-raising account of the Burari deaths – when an entire family of 11 were found hanging on the terrace with the lone survivor dog. From incorporating the many conspiracy theories, to revealing the actual truth, the docu-series unravels expository, backed by a solid screenplay. Not one for the faint-hearted!

Wild Wild Country – Released in 2018, this Emmy-award-winning six-part docu-series follows controversial Indian leader Bhagwan Shree Rajneesh and his former assistant Ma Anand Sheela who start a utopian cult in the Oregon desert that eventually becomes the center of a national scandal. Not only this, it led to a huge conflict resulting in US’s first bioterror attack plus a major case of illegal wiretapping. It’s fraught with cult dynamics, lawbreaking, and takes a look at American political culture.

Don’t Fuck with cats on the internet -This dark and disturbing documentary follows a Canadian pornographic actor – Luka Magnotta. Twisted as he was, in 2010, he shared graphic videos of himself torturing and killing cats on a Facebook group. This led to major uproar and outrage, leading a group of amateur online bandits and animal rights activists to launch their own investigation. However that is not it, the documentary then takes a shocking turn as it unravels more of his heinous crimes, including the murder of student Lin Jun in 2012. Between the sinistorous narration and foreboding transition music, Don’t Fuck with the cats is just the right amount of eerie.

Conversations with a Killer: The Ted Bundy Tapes – Ted Bundy walked so Joe Goldberg could stalk. The infamous serial killer Bundy (portrayed by Zac Efron) was known for his devilishly good looks and charming antics. This documentary brings his story to light through archival footage and interviews with surviving victims, family, friends and law enforcement. The series succeeded in painting the killer for who he really is – a cold blooded remorseless serial killer. Not to mention, one of the most spine chilling aspects of the entire docu-series are his audio recordings from death row that make you seem like he’s speaking directly to you – sheer goosebumps!

American Murder: The Family Next Door – If you’re any sort of true crime aficionado, Netflix’s documentary film – American Murder: The Family Next Door, is a heartbreaking must-watch . It digs into the heinous familicide committed that shocked a Colorado suburb in 2018. On August 13, 2018 – 34-year-old Shanann Watts and her two young daughters went missing in Frederick, Colorado. The husband, Chris Watts, insisted that he didn’t know where his family could be. But as police probed deeper, shocking details emerged. Director Jenny Popplewell pieces together a chilling look at the police investigation as American Murder recounts the events leading up to the horrific crime, Chris’s attempted cover-up, and finally when he was sentenced to life on November 2018 without the possibility of parole.

Crime Stories : India Detectives – Netflix India’s true-crime documentary series follows the Bengaluru police as they attempt to solve four violent crimes. This gritty and intense show is for those who are interested in something other than your average crime thriller. The riveting series seeks to understand the anatomy of a crime through the eyes of men in the khaki. It’s a story that is anything but ordinary.

director Prem Raj Soni says that for Bollywood to draw audiences back into theatres, good content is the new mantra.

‘Mukhbir- The Story of a spy’ Review : Masala & thrill in every scene?

“It’s incredible how people are reacting to these characters,” says Vidya Malvade of her web series Mismatched Season 2