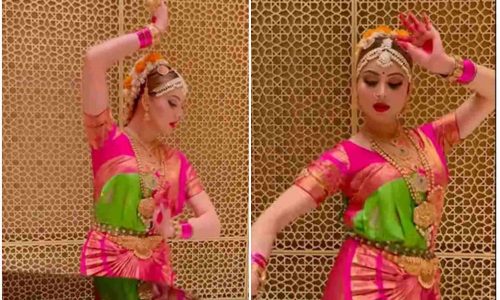 Urvashi Rautela, who is Bollywood’s youngest superstar, is making India proud in all possible ways. Urvashi is currently the talk of the town because of her talent and making India proud at each level. With 53 million followers on Instagram, she’s the most followed Asian actress on social media. She has become a force to reckon with internationally. The actress performed in front of a massive audience at the Umang Awards 2022.

Urvashi Rautela is a trained Kathak & Bharatnatyam dancer. As much popularity as she holds for her acting; she is as famous for her dancing. This year is very special as our talented actress, Urvashi Rautela, has set the stage on fire with her breathtaking Bharatnatyam performance.

Her performance evoked the goddesses, Ma Durga and Laxmi.Umang is all about honouring and appreciating the efforts of the Mumbai Police.

A few glimpses of the actress from her performance are taking the round over the internet, the actress has also shared her backstage rehearsal clip on her social media where she is looking breathtaking to our eyes, Urvashi had opted for a vibrantly colorful sari with a pleated stitched cloth.

The beauty of this dress was that it represented the culture and tradition of the dance form. For the accessories and makeup, she opted for a ‘Temple Jeweler’, such as bangles, earrings, necklaces, and wristlets. The bun and the plait of her hair were decorated with flowers.

Thalaisaman’, which is called ‘headpiece’, The ‘chandrasuryam’ which were on either side of the heads. Vankies’ Talking about the makeup, she went with a traditional Bharatnatyam look with those heavy eyeliner and kajal extended outwards from the eyebrows, with perfect blush and lipstick which was on the point.

To give that traditional touch, she applied red dye to the tips of the toes, fingertips, and soles of the Urvashi’s performance stole the hearts of many audiences with her performance over Mere Dholna song of Bhool Bhulaiyaa 2 and we couldn’t take our eyes off as she performed with such grace and ease.

Without a doubt, we can say that she is one of those actresses who is a complete box of talent, be it in fashion, outstanding dressing sense, or setting the stage on fire with her sensuous or graceful performances.On the work front, Urvashi was recently appointed as the first global brand ambassador for the Smile Train foundation and just a time before that Urvashi was seen performing in front of 50,000 people at the trailer launch of her pan-India film, The Legend.

The actress is making sure to keep her admirers proud and engaged with her daily life activities and global achievements.