On social media, Maharashtra Governor Bhagat Singh Koshyari announced the felicitation of Covid Warriors at a function organized by the Bhamla Foundation at Raj Bhavan. Present at the do at the Raj Bhawan were Dr. Niranjan Hiranandani, playback singers Shaan, Palak Muchchal, and Bollywood actor Ali Fazal, along with Bhamla Foundation Chairman Asif Bhamla. Through the last 8 months, the foundation along with celebrities and influencers have worked tirelessly to ensure that the crisis is dealt with effectively.

Ali, who returned from the El Gouna festival in Egypt, was elated to be present at the function where the COVID warriors (on ground healthcare workers) were felicitated.

He said, “It has been a rather nostalgic event, to begin with. I had the honor to go back to the Raj Bhavan after years. This institution holds great value to me for personal reasons. But credit where it’s due, the Bhamla foundation has done wonders during these tough times. There have been others too who have relentlessly worked to help the needy. It’s been a fight for and by the common man. And we, few people standing, are made of the same working-class blood. So it was indeed a proud moment to see such eminent personalities ( especially the health sector) or rather warriors felicitate each other. People who will eventually bring us out into the new world, safe and sound. We are all birds of the same feather. And I truly hope we restore humanity into our lives and societies very soon. Aagey bohot kaam hai. My respect to all the doctors and the police personnel across Maharashtra who have relentlessly worked despite the personal dangers of this pandemic.”

The actor recently released the second season of Mirzapur and is awaiting the release of Death on the Nile. He is expected to kick off the shoot of his next Hollywood project Codename Johnny Walker soon. 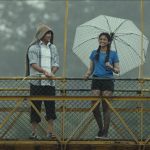 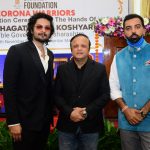