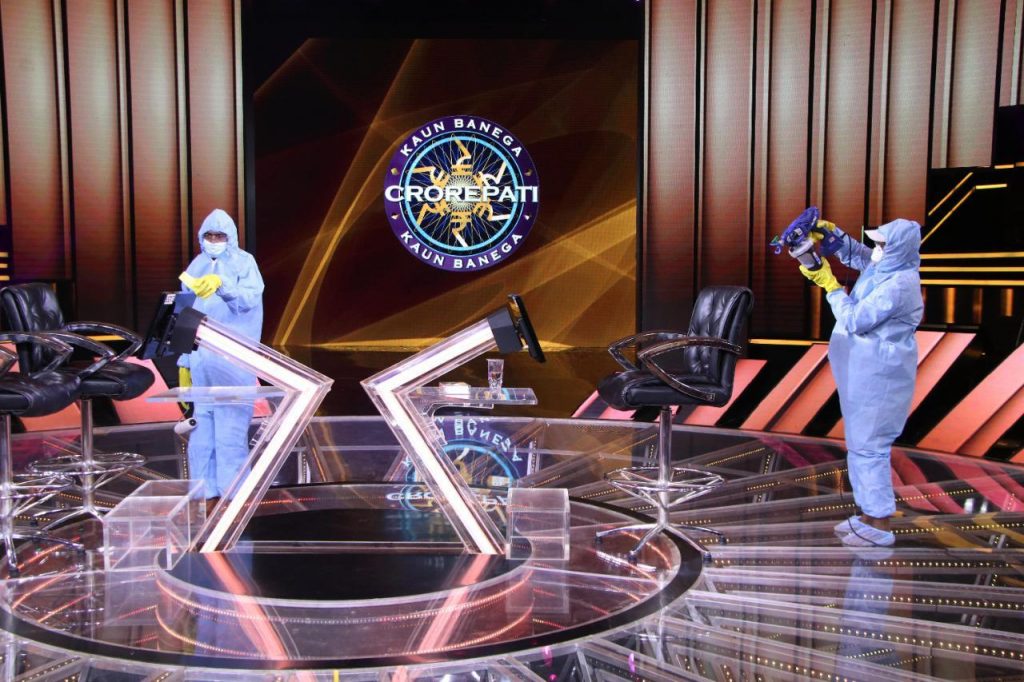 As an Associate Sponsor, undertook a special sanitization drive on the set with its service San Assure+, as the show gears up for its on-air launch on 28th September.

With Kaun Banega Crorepati (KBC) all set to make a grand comeback with its 12th season, the preparations, too, have been raised a notch higher given the pandemic. Setback Ka Jawaab Comeback Se dene ke liye, the show has undertaken various safety & precautionary measures, as mandated by the GOI, where sanitization plays a very important part in the shoot routine. Taking this a step further, Sony Entertainment Television’s (SET) valued partner and an Associate Sponsor on the show, Asian Paints activated a specially curated sanitization drive on the set of KBC, recently.

San Assure+, a sanitization service by Asian Paints, promises to kill harmful germs using quality equipment and material while following stringent safety protocols. A team of 3 Applicators, 1 Supervisor and a Technical Associate was deployed on the set of KBC to undertake this special sanitization drive as the show gears up for its on-air launch on 28th September. This sanitization drive contributed to SET’s ongoing endeavor of ensuring best hygiene and safety practices being maintained on-set. As associate sponsors, Asian Paints has also provided Viroprotek Hand and Surface Santizers for the entire crew at KBC.

As a platform, KBC has gone beyond its capacity as a show year after year, putting the common man at the forefront with iconic host of the show, Mr. Amitabh Bachchan, applauding people’s power of knowledge. As a reflection of changing times, the 12th season of the show not just gears up for a comeback amidst a pandemic, but also sets an example for the viewers to consider setbacks as a steppingstone for a greater comeback.

Also read this  Arjun Bijlani is grateful to birthday girl Ekta Kapoor, wishes her on Instagram

Speaking on the association for KBC, Amit Syngle, Managing Director & CEO, Asian Paints Limited said, “Asian Paints is extremely delighted to be associated with Sony Entertainment Television’s most iconic show – ‘Kaun Banega Crorepati’. For us, a big focus this year has been taking ownership of safety by employing preventive technologies and hygiene solutions. Be it through San Assure+’s sanitizing capabilities or via Viroprotek a universal hand and surface sanitizers; it is our intention to enhance the safety and wellbeing of our country.  We are proud to have had the opportunity to provide a sanitized working environment to the beloved host of KBC, Mr. Amitabh Bachchan, the crew members and the participants with our San Assure+ sanitizing service.”

Sandeep Mehrotra, Head – Ad Sales, Hindi & Regional Entertainment, Sony Pictures Networks India said, “Our valued association with Asian Paints continues this year as well, for KBC, and we are happy to have on board likeminded partners who support us in positively reinforcing best practices. The specially curated sanitization drive by Asian Paints, with their service San Assure+, contributed to our ongoing efforts of maintaining a high level of safety & sanitization on the set.”

Also read this  It may never be enough, but here are five reasons to love Mohsin Khan for

About Asian Paints: Since its foundation in 1942, Asian Paints has come a long way to become India’s leading and Asia’s fourth largest paint company, with a turnover of Rs. 192.48 billion. Asian Paints operates in 15 countries and have 26 paint manufacturing facilities across the world, servicing consumers in over 60 countries. Asian Paints has always been a leader in the paint industry, innovating new concepts in India like Colour Ideas, Colour Next, and Kids’ World.
For more details on Asian Paints San Assure+ please visit the below website:
https://www.asianpaints.com/services/san-assure.html

About Sony Entertainment Television: Sony Entertainment Television (SET), one of India’s leading Hindi general entertainment television channels, is a part of Sony Pictures Networks India (SPN). Since its launch in October 1995, SET has created a unique space of being the ‘Thought Leader’ in the Indian Television industry with path breaking content and innovation in the entertainment business.
Over the years, SET has continued to bring forth an impressive array of impactful urban stories delivering on the promise of novelty, variety and quality with finite shows like Jassi Jaisi Koi Nahin, Heena, Bade Acche Lagte Hain, Kuch Rang Pyaar Ke Aise Bhi, Patiala Babes, Beyhadh, Ek Duje Ke Vaste, Mere Dad Ki Dulhan and several others. Apart from these, socio-mytho and historical shows like Mere Sai, Vighnaharta Shree Ganesh, Porus, Chandragupta Maurya, amongst others have also enjoyed a positive viewership.
SET pioneered new waves in television programming with home-grown formats like Super Dancer – which has successfully completed three seasons, Superstar Singer and the most recent – India’s Best Dancer. Furthermore, SET revived Kaun Banega Crorepati, which redefined its weekday appointment viewership, along with shows like Indian Idol, The Kapil Sharma Show, Comedy Circus and Dus Ka Dum which strengthened its weekend leadership.
SET, known for its innovative concepts and exciting formats, is the most preferred premium family entertainment channel reaching 62 million households in India. SET and SET HD are the Top 2 channels driving viewership from premium homes as per BARC PrimaVU. SET is the only media brand to rank fourth, after Samsung and Apple, as the Most Desired Brand of 2020 as per TRA study.
SET’s international feed is available across US, UK, Africa, Europe, Canada, Australia, New Zealand, Singapore, Nepal, Bangladesh, Maldives, Malaysia, Indonesia, Fiji Islands and Seychelles.

If I ever see anyone doing drugs on the set, I will put my foot down, says Sharad Malhotra