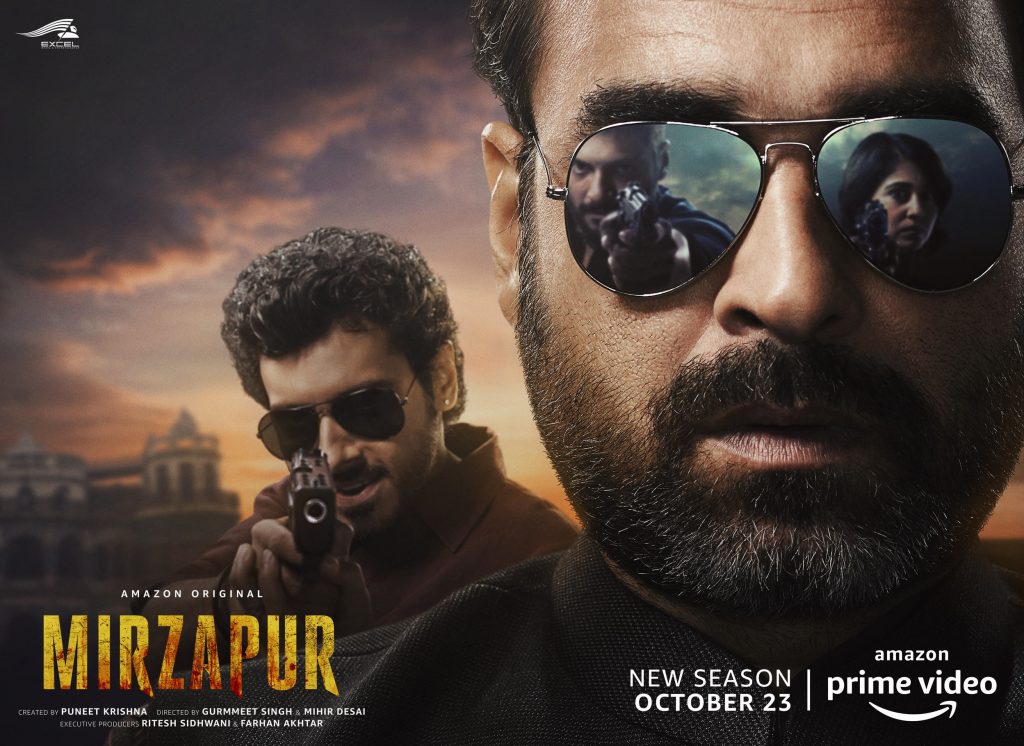 The wait is over for fans of the much-loved Amazon Original SeriesMirzapur, which returns with a 10-part action-packed new season on October 23, 2020.

Produced and created by Excel Media and Entertainment, the Amazon Original Series can be watched byPrime members in India and across 200 countries and territories.

MUMBAI, India, 06 October 2020 –Amazon Prime Video today unveiled the gripping trailer for theeagerly-awaitedsecond season of Amazon Original Series Mirzapur, which will launch on 23rd October 2020.Produced and created by Excel Media and Entertainment,the 10-partnew season of the hinterland crime drama where powerand revenge provide a way to keep order, will reveal what happenedto the infamous residents of Mirzapur, followingthe aftermath of ashocking season 1 finale.The new storyline dives deeper into the murky and rustic world of guns, drugs and lawlessness and traverses through myriad layers of vengeance, conspiracies, romance, drama and the formidable women power in the terrains of Mirzapur.

The narrative of  Mirzapur S2 will unfold through the lens of popular characters from the first season played by Pankaj Tripathi, Ali Fazal, Divyenndu, Shweta Tripathi Sharma, RasikaDugal, HarshitaShekharGaur, Amit Sial, Anjum Sharma, SheebaChaddha, Manu Rishi Chadha and Rajesh Tailang. Fans can also look forward to some interesting twists in the plot essayed by the new talentVijay Varma, PriyanshuPainyuli, and Isha Talwar among others. Prime members in India and in more than 200 countries and territories can finally know the answer to KaunLega Mirzapur?,meaning ‘who will take the reins of Mirzapur?’on October 23, 2020.

“At Amazon, we do everything keeping our customers in mind. Their incessant demand for Season 2 of Mirzapur is a testament to the fact that we have spearheaded our efforts in the right direction”, Aparna Purohit, Head of India Originals, Amazon Prime Videosaid, “The fandom that has built for the world of Mirzapur over the last two years has been phenomenal; viewers have expressed their love and appreciation for the show and arehighly engaged and immersed in the lives of the characters.It’s characters have become a part of the popular culture.We have had a wonderful collaborationwith Excel Media and Entertainment over many years and we are thrilled to join forces again for yet another gripping season. We are delighted to bring the highly-anticipated new season of the captivating and gritty crime drama,Mirzapur.”

“For the last two years, our phones have been constantly ringing with fans waiting eagerly to watch Mirzapur Season 2. We are happy to put an end to the wait and present an all new season to them.” RiteshSadhwani, Producer, Excel Entertainment said, “We, at Excel Entertainment, always strive to deliver high-impact, high-quality content for our viewers and we believe Mirzapur has set a precedent for every crime drama series that followed. Our association with Amazon Prime Video spans over multiple years and many titles, and we are happy to cross yet another milestone with them through the new season.”

“We created the first season with the intent to ‘get our hands dirty’ with a pure hinterland drama; what really surprised us was the worldwide love that’s grown for our local show,”said Creator Puneet Krishna, “The success of the first season has set a benchmark and encouraged us to take the new season several notches higher. Viewers will be in for an immersive experience through the plot twists, character developments and captivating storyline in Season 2!”

The series is produced by Excel Media and Entertainment, created by Puneet Krishna and directed by Gurmmeet Singh and Mihir Desai.

Synopsis:The world of Mirzapur has become more about power, politics and revenge. It is about conspiracies and people double-crossing each other while carrying guns that they won’t hesitate to use. This season doesn’t stay confined to the violent world of Mirzapur – It takes us to the power corridors where a nexus between politics and criminals prevails. This season also takes us to a land beyond Mirzapur, a place which has its own set of violent and powerful families running various illegal businesses. The women of Mirzapur have become bolder and more complex. They will not hesitate in using any means to achieve their goals. Who will win in the end? Is there any one left to challenge the Tripathis? The canvas gets bigger this season, but the rules remain the same – without spilling blood you won’t survive here!

Mirzapur Season 2will join the thousands of TV shows and movies from Hollywood and Bollywood in the Prime Video catalogue. These include Indian films GulaboSitabo, Shakuntala Devi, PonmagalVandhal, Law, French Biriyani, SufiyumSujatayum and Penguin along withIndian-produced Amazon Original series like Bandish Bandits, Breathe: Into The Shadows,PaatalLok, Four More Shots Please, The Family Man, Inside Edge, and Made In Heaven and the award-winning and critically acclaimed global Amazon Original series Tom Clancy’s Jack Ryan, The Boys, Hunters, Fleabag, and The Marvelous Mrs. Maisel. All this is available at no extra cost for Amazon Prime members. The service includes titles in Hindi, Marathi, Gujarati, Tamil, Telugu, Kannada, Malayalam, Punjabi, and Bengali.

Prime members will be able to watch all episodes of Mirzapur Season 2anywhereand anytime on the Prime Video app for smart TVs, mobile devices, Fire TV, Fire TV stick, Fire tablets, Apple TV, Airtel, Vodafone, etc. In the Prime Video app, Prime members can download episodes on their mobile devices and tablets and watch anywhere offline at no additional cost. Prime Video is available in India at no extra cost to a Prime membership for just ₹999 annually or ₹129 monthly. New customers can find out more at  www.amazon.in/prime and subscribe to a free 30-day trial.

Prime Video is a premium streaming service that offers Prime members a collection of award-winning Amazon Original series, thousands of movies and TV shows—all with the ease of finding what they love to watch in one place.  Find out more atPrimeVideo.com.

●        Enhanced experiences: Make the most of every viewing with 4K Ultra HD- and High Dynamic Range (HDR)-compatible content. Go behind the scenes of your favorite movies and TV shows with exclusive X-Ray access, powered by IMDb. Save it for later with select mobile downloads for offline viewing.

●        Included with Prime: Prime Video is available in India at no extra cost with a Prime membership for just ₹999 annually or ₹129 monthly. New customers can find out more at www.amazon.in/prime and subscribe to a free 30-day trial.

Excel Entertainment’s oeuvre comprises of a string of box-office hits like DilChahta Hai, Don, Zindagi Na MilegiDobara, Talaash&Fukrey. Alongside these blockbusters, Excel has also launched avant-garde ventures like Gully Boy, India’s first hip hop film and the official entry to the Academy Awards this year and Inside Edge, India’s first original series on Amazon Prime Video that was nominated for the coveted International Emmy Awards under the Best Drama category in 2018. In addition to commercially successful cinema, Excel has consistently garnered critical acclaim, Rock On being one such accomplishment that won the production house its second National Award in 2008.

After success of Amazon Prime Video’s ‘Maara’, here are some of the most successful remakes and adaptations of Malayalam films; Must watch!